Back in 2014, MetroPCS changed the way certain Android smartphones could be unlocked from their network. By pre-installing a Device Unlock App on the phone, MetroPCS customers can now request and apply a mobile device unlock directly from the device.

This is the only way to unlock a Samsung, LG, Alcatel, HTC, Huawei, Kyocera, Motorola, Sony Xperia or ZTE phone from the MetroPCS network with the Device Unlock App.

Before proceeding to order the unlock service from us, just make sure to check that the APP is working correctly.  When using the APP it should initially say "Not Eligible for Unlock", if you are getting the messages "Communication Error" or "Server not responding" Please try again later." then do not order until you find a way for your phone to communicate properly with the server.

We have some tips to fix these errors that you can find at the bottom of the page.

The official MetroPCS Device Unlock APP is not in the Google Play store although there is a lot of look-a-like [fake] apps to be found when searching for 'DEVICE UNLOCK APP'.

The MetroPCS APP comes in the Application folder that is already pre-installed on your phone.   If you can't find this APP then it may be hidden, you can try  searching for it in your app settings.

What if the APP is not found on my phone?

If the APP is still not there, then there is two possible reasons for that.  Either your phone is already unlocked [the APP uninstalls itself after a successful permanent unlock] or the second possible reason for the APP to not be there is that your phone was made before 2015 when MetroPCS was still using unlock codes.  If that is the case, then you need to order an unlock code instead [Message us and we will provide a code instead].  If this is the case then before ordering an unlock code, simply insert a SIM card from a different carrier and make sure the phone asks automatically for a network unlock code. 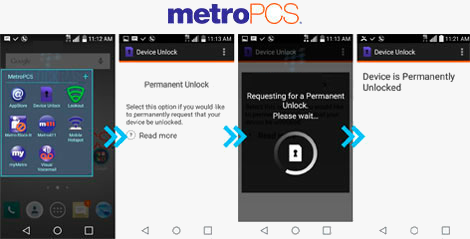 MetroPCS has eligibility requirements before you can unlock your phone using their APP.  But not to worry, even if you are not eligible according to them we can still unlock your phone using THEIR APP.   All you have to do is submit an order with us.  At the top of this page, you will find the order form. Simple select the service from the list and Click NEXT.

Now that you have ordered you unlock from us wait for our email [usually it takes a few hours.]

Once we have emailed you that your order is completed, then simply Open up the APP on your phone and make sure your phone is connected to WIFI, and then simply click on Permanent Unlock.

You should get the message: "Unlock Approved: Mobile device is permanently unlocked".

Now make sure to restart your phone  [this is important].

That's it, now your phone needs to reboot and then it is successfully permanently unlocked! Congratulations.

Please verify that you have the Device Unlock app on your device, connect to Wi-Fi and press Permanent Unlock. If you get the message “Unlock Failed" or “Not Eligible for Unlock" then your phone will be unlocked with this service.

What if my Metro PCS phone is Blocked for unpaid Bills, will the service work?

If your phone is blocked or blacklisted because it is reported lost or stolen or has unpaid bills then the phone may not work even after successfully unlocking it since carriers in North America are required to refuse service for phones reported as Blacklisted. Before unlocking any phone, please check your IMEI first.

What to do if the MetroPCS Unlock Fails or you are getting connection errors when using the APP?:
Follow these steps to get it working again:
If that didn't work, then follow these steps:
1) backup the device
2) do a complete  factory reset of the device
3) turn on the Air Plane mode
4)  re-enabled ONLY the WIFI
and then use the Device Unlock APP again, this time it will work.

Please note as of January 20, 2019 the unlock APP can be found on the following MetroPCS models:   If you have a model not listed below or your phone is not from MetroPCS then please contact us before ordering. If your phone is from T-Mobile, it works the same way. You can order our T-Mobile Device unlock app service.

Only Some MetroPCS Samsung phones from 2015 still need unlock codes and do not have the Unlock APP installed.  Before oredering the unlock APP service make sure that the phone has the APP pre-installed and does not request a sim network unlock pin.